One of the HS kids I've been working with decided last year he wanted to give 2 handed bowling a full time shot. I fully encouraged it and he's making a lot of progress. That being said, he's been fighting his ball roll and regularly tracks over the middle finger. I realize that a short pin isn't the best example, but this is pretty consistent across his arsenal.

His dad is a bit of a ball nerd and actually to him to work with Slowinski. They came up with these pitches to try to pull the track from the holes. 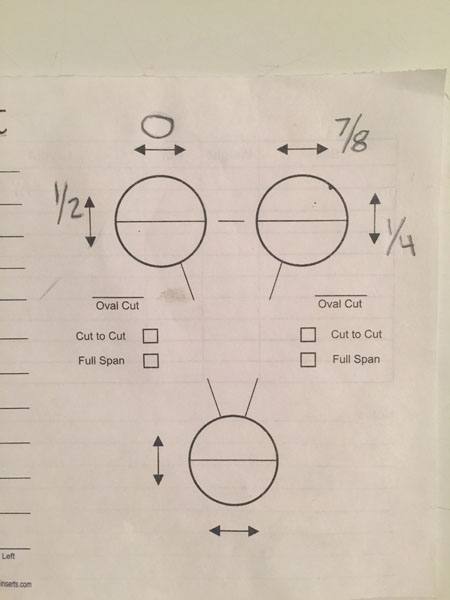 Didn't work. Overall, the kid has made a ton of progress, but fights hitting the holes, which kills his ball roll. Here he is in action to give you a better idea of his release.


Slo mo of his release


He does a lot right, he can come out of left field with random changes. About a month ago, his follow through was going dead left and palm straight to the ceiling. Axis rotation was non-existent. Took me a two sessions to get him to start going around it again. As for this, I don't know. To the naked eye, it looks like he's getting around it enough, but that ball track says otherwise.

Any idea of tips/drills? Are asyms an option? With his rev rate and game, I would rather he get this fixed and not have to eliminate symmetricals. I know there's a fix, but I'm stuck.
USBC Silver Certified Coach

Keep the pin above the line from his PAP to top of middle finger. Juha says that the best way to get off middle finger is to release earlier. He does not want fingers in ball past knuckle and he wants holes fairly loose. avoid hitting up. Looks like Joe is trying to do what Mo recommends with ball specs. You should also not use small VAL angles. Mo recommends at least 45*
Top

Check out the #MoMonday video on this very subject.

He needs to try and stay behind the ball longer and get it off his hand much earlier. Do you know what his tilt is?
USBC Silver Level Coach
BCU Graduate - Mastery of Layouts
BTM contributor
Top

deanchamp wrote: ↑
January 5th, 2020, 3:19 am
He needs to try and stay behind the ball longer and get it off his hand much earlier. Do you know what his tilt is?

Recently, no. He lives about 45 minutes from me and is in the middle of HS season. I've been doing video analysis through his dad.

I'm trying to think of a way to communicate stay behind it longer and get it off earlier. Some people would say "wait, which one" if you know what I mean.
USBC Silver Certified Coach

Many 2-handers/ thumbless bowlers end up with negative tilt as they over-rotate their hand due to releasing the ball too late. And not over rotating by coming around the ball to bowl a spinner, but over rotating if you were looking at the ball from the lane level, which reduces the tilt to zero or negative. I see it all the time with younger 2-handers. They don’t get their non-bowling hand off the ball early enough, and they don’t straighten their bowling arm, releasing the ball with their elbow still bent. This causes a type of chicken wing release.

All this won’t be easy to convey via correspondence, as it isn’t that easy to describe in person!
USBC Silver Level Coach
BCU Graduate - Mastery of Layouts
BTM contributor
Top

Off the top of my head -
In reading Deans response, I wonder if a side view and or front view would help.
A better view of the timing of the off hand might highlight Dean's points.
YouTube videos can be slowed to .25

A side by side comparison of the "student" with an accomplished 2 hander could help.
Remember Jim's video which can be found on the video.
Contrasting A to B can help turn on the light. If he sees himself possibly exhibiting the flaw Dean mentioned, belief should follow which is a big step.

Don Johnson often used over exaggeration of the opposite move. For example, when he is too late, make him try to be too early, eventually working back from there.
A bit like learning to throw a straight ball by the throwing a backup ball.

Devising a drill with perhaps a soccer ball, for off lane practice might help.
Use of mirrors or reflective surfaces could help.
It ain't what you don't know that gets you into trouble. It's what you know for sure that just ain't so

A proper rear view video aligning swing slot with line of play would help diagnose better but here it goes.

1)We need to make sure the ball is substituting the ball side leg on the way forward, can’t really tell from video but this is essential to get into the best release position possible. If he can’t do it post a side video and I will fix it.

2)Head wants to stay upright, this creates tension on his ball side part of neck and promotes a bit of shoulder side rotation. Have him learn to get used to looking at the lane with a tilted head. To do this, his neck should be in line with his spine at release, this will bring his head left of the swing plane and promote more up and down shoulder movement. Think diagonal letter “T” where clavicle becomes one line with the arm thus creating a long lever.

Oh and don’t try to fix his follow through, this is a symptom not a cause. Release drills and swing and slide drills will help isolate the parts of his technique he needs to work on.
Top

Juha says to roll it off of the wrist starting about a foot before the ankle (he says it happens when opposite hand leaves the ball). In the video, his wrist appears to stay fixed as if he has a wrist guard on (this is what I meant by not hitting up on ball and why Juha wants loose fingers). You might have him throw it for a couple of games in practice with out inserting fingers to get the feel of what he is talking about.
Top
Post Reply
11 posts • Page 1 of 1